Love Hearts Get an Emoji Update!

5 years ago by Laura

Confectionery manufacturer Swizzels who produces the iconic British sweets with messages of love ❤️ on, Love Hearts, is giving itself a modern makeover in the form of emojis ?.

Since their creation in 1954, Love Hearts have undergone a number of transformations ? to keep up with ever-changing language ?. Outdated messages which have been dropped include, “Hey Daddio” and “Far Out” which were everyday sayings in the fifties and sixties but are no longer use ?. In more recent times the UK has seen the additions of “Email Me” ? in the nineties and “Tweet Me” ? in the noughties! Emojis were the next most natural step ?. 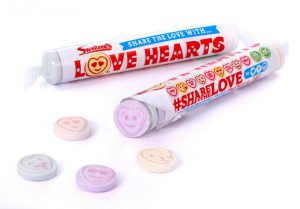 If you’re worried we’ve lost the words ? on Love Hearts altogether, don’t fret. Brand Manager, Claire Lee, said: “Emojis ? are one of the newest and most popular ways to communicate ?, so adding them to our more traditional messages allows Love Hearts to appeal to both the younger ? and older ? generations.”

11 of Britain’s favourite emojis will be added to packs of Love Hearts ?, including the standard smiley ?, crying with laughter ?, wink face ?, kissing ?, tongue out ?, crying ?, heart eyes ? and the sunglasses ? emoji.

Which emoji would you like to see added to Love Hearts ?? Post your answers in the comments below!

Happy News for a Brazilian Couple!

5 years ago by Laura

The Brazilian couple who got married in style 60 years after their original wedding day...

FreemoijLottery and its partners use cookies and other similar identifiers for analytics, personalisation, and ads.

Choose a combination of 5 emoji’s to start playing